Todd Starnes is a longtime, award-winning journalist and radio commentator. His daily radio presence has reached millions of listeners on hundreds of stations, and his syndicated column is also read by millions. He is a frequent contributor in major media, and social science researcher George Barna also included Starnes as one of the top media influencers for Evangelical Christians in the 2016 presidential election.

Starnes has covered some of the biggest stories of the past decade—from presidential campaigns to the culture wars—interviewing an array of newsmakers and celebrities. He has authored five books—including “The Deplorables’ Guide to Making American Great Again” and “God Less America,” a collection of essays documenting the war on religious liberty—and is the recipient of a regional RTNDA Edward R. Murrow Award and the Associated Press Mark Twain Award for Storytelling. In his newest book, “Culture Jihad: How to Stop the Left from Killing a Nation,” Starnes asks if America can be saved and suggests that if good-hearted patriots rise up together, they can stop the assault and keep America great.

During his more than a decade at Fox News Channel, Starnes hosted one of the top radio programs on the network. He was also one of the network’s most popular columnists. During his final year at Fox, he hosted “Starnes Country” on Fox Nation.

Starnes is a frequent speaker at churches, Christian conferences and Christian universities. He has delivered messages at the Ronald Reagan Ranch, the Billy Graham Training Center and the Family Research Council’s Values Voter Summit.

In less than four years the Todd Starnes Radio Show has become freedom’s blowtorch across the  fruited plain.

Todd’s digital presence is massive. According to ComScore, his website consistently ranks among the top 5 of all talk radio hosts in the nation.

And most importantly, Todd’s show is a proven revenue winner for stations across the country. Todd offers 17 minutes, 20 seconds of local advertising in his national show.

Get the Todd Starnes Show on your station now!
Call Starnes Media Group Affiliate Sales at 316-648-5613

Todd Starnes is an award-winning journalist who spent more than 14 years at Fox News Channel with stops at WLAC in Nashville and KFBK in Sacramento.

In addition to being a host, Todd recently purchased KWAM, a news-talk radio station in his hometown of Memphis – the flagship for his national show.

What Program Directors Say About Todd

Toby Howell, KARN, Cumulus: “A year ago NewsRadio 102.9 KARN took a leap of faith by signing the Todd Starnes Show as our live syndicated midday show and the pace that Todd was able to build a connection with our audience was incredible. He has boosted our midday numbers, created a product that our sales department is able to maximize, and delivers a message that is eloquent yet bold that our listeners have become attached to. I would recommend The Todd Starnes Show to any conservative talk station in the country that wants to win.”

Sean Casey, WCBM, Baltimore: “In the ongoing war on our culture, our language and our border, Todd Starnes is a soldier fighting on the front lines daily. His content, humor and insight are important tools in this battle.”

Jeff Stein, KXEL NRG Media: “Todd’s connection with the audience is outstanding. He brings a Heartland sensibility to issues, which along with his keen knowledge, conservative credentials, and great guest list, is a winner with KXEL’s Midwest audience.”

Ray Richardson, WLOB: “Todd Starnes offers a unique blend of down-home humor coupled with a very principled mastery of the issues that matter most. Starnes, in many ways, is a modern-day Will Rogers with a sharp, political mind.”

What Todd Will Do For Your Local Station

“Todd Starnes has a pulse on today’s culture and shines a discerning light on political correctness that has indoctrinated the minds of people from every walk of life. I am grateful the Lord has given Todd a platform that he faithfully uses to declare Christ’s truth.” – Franklin Graham

“Todd Starnes has been on the front lines of the culture war for decades. He mixes rock-solid investigative journalism with Southern humor to deliver must-read books for freedom-loving patriots.” – Mike Huckabee

What Advertisers Say About Todd’s Show

“The Todd Starnes Show has proven invaluable in the promotion of the University and recruitment of students. Across the nation, wherever we talk to prospective students and their parents, inevitably, countless people tell us how they first heard of TMU from the Show.” – Dr. Emir Caner, president of Truett McConnell University

Join the fastest-growing conservative talk show in the nation. Call affiliate relations at the Todd Starnes Show 316.648.5613 or email dalton@starnesmediagroup.com. 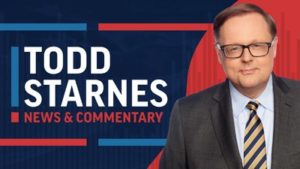 Click here to learn how to get ‘Todd Starnes News & Commentary’ 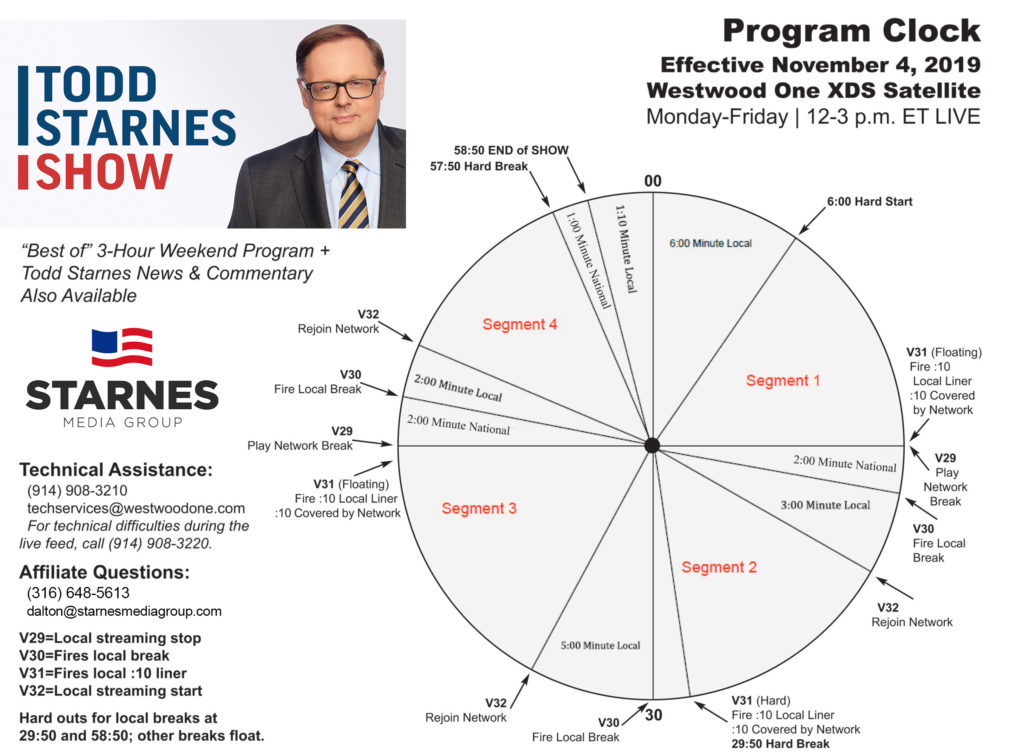 *Print and/or download a high-rez version of the Program Clock here.

Get the Todd Starnes Show on your station now!